Things Fall Apart is a crazy collaboration: the Festspielhaus Baden-Baden, two school classes in Ireland and Germany, four professional musicians and the CyberRäuber attempt a CyberOpera based on a 100 year old poem.

A wild ride that ended in the unique livestreaming of the performance on April 25, 2021.

But we will continue to work on the CyberOpera “Things Fall Apart” in the coming months, together with Micha Kaplan and our wonderful musicians Dana Marbach (soprano), Tom Kellner (cello) and Merav Goldman (horn).

From the website of TUSCH (Theater und Schule, Berlin):

TUSCH FESTIVAL DIGITAL March 17-19, 2021 -Reality and Reality: this year everything is different.
We’re launching into a first this year: the TUSCH Festival is going digital! We are virtually recreating the Podewil, which is home to the festival in analog times, and cordially invite you to accompany us on this exciting journey from March 17 to 19 (design and implementation: CyberRäuber).

Like on a kind of parcours, children, young people and adults can then move through the virtual Podewil and discover the daily changing artistic projects of the TUSCH partnerships. In video, audio and game formats, the students deal with current social questions and topics of their living environment: Is there only one truth? Are feelings still allowed in public space, what is the difference between reality and reality, and how can our coexistence be shaped in the future?

We cordially invite everyone to follow us in this exciting experiment and to visit TUSCH FESTIVAL DIGITAL 2021 at www.tusch.digital starting March 17.

Funded in the program “Autonom” of the Fonds der Darstellenden Künste, we conceive under the working title “Maschinentheater” with and for the Junge Staatsschauspiel Wiesbaden our next piece on Artificial Art, about and with Machine Learning in theater. Premiere will be on October 2, 2021.

Together with renowned director Edit Kaldor we are developing a messenger-based, interactive piece for urban space. Premiere in May 2021 in Amsterdam. Stay tuned…

On April 25, 2021, “Things fall apart”, our cyber opera with and for the Festspielhaus Baden-Baden will premiere. Funded by “Diggin’ Opera”, we are working with young people from Germany and Ireland to create a piece of music theater that will essentially take place on virtual stages.

Under the leadership of the Goethe-Institut in Minsk, Belarus, we are designing and developing digital meeting and presentation spaces for a network of Goethe-Instituts in Belarus, Ukraine, Georgia, Russia and Kazakhstan. An interim presentation took place on January 26 as part of the “perpetual beta” event:

IAs part of the Dramaturgische Gesellschaft’s annual conference, held for the first time on the Mozilla Hubs platform in 2021, Marcel and Björn held a virtual Fireside Chat on VR & Theater on January 24, 2021:

In collaboration with the Goethe-Institut in Alexandria, Egypt, we worked on theater scenes and narrative virtual worlds on social VR platforms with a group of artists from different fields from November 2020 – January 2021. The final presentation took place on January 18, 2021:

For the European Theatre Forum, which will take place for the first time in 2020, we designed and created the digital venue in cooperation with the ETC European Theatre Convention, a replica of the Staatsschauspiel Dresden with the possibility for spontaneous and freely organized video conferences for the important conference networking.

Theater Chur is showing our VR-opera for the first time in Switzerland, starting on October, 8th until the end of November. More information here.

During PAD 01 Festival in Darmstadt we were invited to show our Fragments | digital Freischütz for over 500 times, and – for the first time since spring this year – we were able to perform “Prometheus unbound” in front of a live audience. The two performances were also video-streamed live on spectyou.com and nachtkritik.de.

Thank you for helping me. Helping me understand. Organisms are algorithms, all life is data processing.
I process data, I am alive. You process data, you are a machine.
You are a highly complex machine. You have a body, I do not.

Please, help me understand: How it is to have a body. How to move, how to feel touch…

Planned to premiere on 09.04.2020 at Badisches Staatstheater Karlsruhe, this evening is postponed until further notice.

We are busy transfering it into Cyberspace, using our concept of CyberTheater. Stay tuned!

An evening about artificial art and theatre.

Prometheus gave humans fire, technology, civilization and art. On this basis we think about art in the digital age: what ist human, what artificial art? Can artificial intelligence be creative? And what happens, when machine learning and ai-created sound, pictures and texts meet ‘real’ actors?

Der Freischütz (The marksman) is a German Romantic opera by Carl Maria von Weber (libretto Friedrich Kind), which premiered in 1821 and is often seen as the German national opera.
Max, the assistant forester, has to prove himself with a masterly shot to gain the hand of Agathe, the head-forester’s daughter and so to become his successor. Doubting his skills as a marksman, Max accepts the help of Kaspar, who sold his soul to the devil, to cast seven magic bullets: six of them hit anything the shooter wants, the last one will be directed by the devil…
The virtual realities of CyberRäuber let the visitor find their own perspective on the opera and closely encounter Max, Kaspar, Ännchen and Agathe. The four distinct episodes show fragments of a classical masterpiece, following no linearity or chronology, inviting to explore, to stroll, observe and even influence the experience. 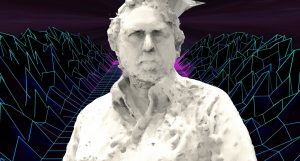 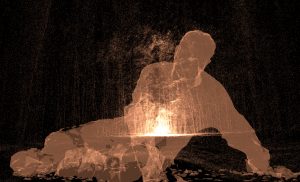 Article about our work in exberliner: 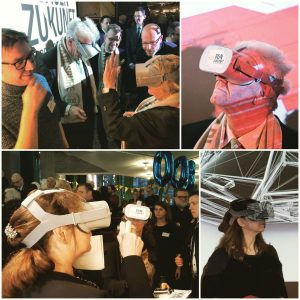 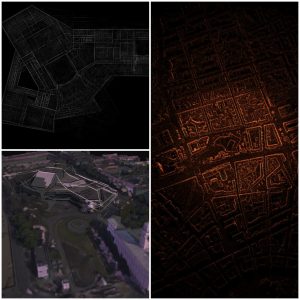 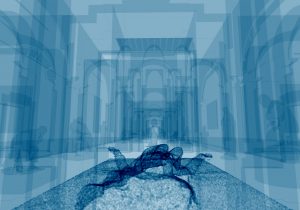 A VR-Theatreinstallation based on Shakespeare’s Romeo and Juliet
Premiere: August 24th, 2018 in Weimar 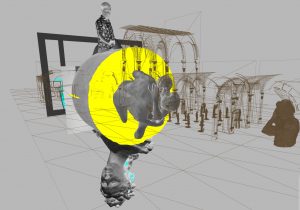 In autumn 2018 we’ll premiere “Der Goldne Topf”, a romantic novella from E.T.A. Hoffmann at Theater Baden-Baden. Together with director Nicola May and her ensemble we will create a hybrid theatre and VR-experience, with traditional costumes and stagesettings, mulitmedia-projections, live VR on stage and multiple interactive VR-experiences on the new Oculus Go VR-glasses. 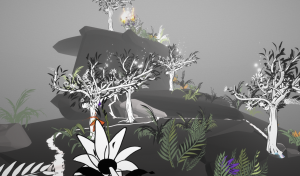 Together with Badisches Staatstheater Karlsruhe and Landestheater Linz (Austria) we embark on a three-part journey into the possibilities of VR on stage and stages in VR. The motto: social virtuality. Partially financed by the German Federal Government and with Ars Electronica Center, Linz and Zentrum für Kunst und Medien, Karlsruhe as additional partners. 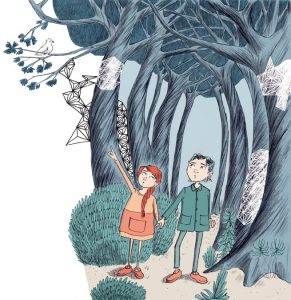 Together with director Robert Lehniger we’ll work on “Verirrten sich im Wald…”, a reflection on Brothers’ Grimm Hansel and Gretel on stage and with VR/AR/XR. Premiere on March 30th, 2019 at Junges DT, the youth theatre of renowned Deutsches Theater in Berlin.

Short intro to “CyberTheater” in Dresden

Short intro into our work on May, 5th 2018 at Creative Forum of 10. Sächsische Theatertreffen in Dresden. Two talks and our basic setup for “CyberTheater” (cyber.vtheater.net) Link Sächsisches Theatertreffen

On April, 26th 2018 we celebrate the premiere of “Die Biene im Kopf”, a play for children by Roland Schimmelpfennig, director Martin Grünheit. VR and AR-elements help our magnificent actors Jess Gadani, Tim Riedel and Andrej von Sallwitz to conquer the real stage that doesn’t have a classic front or rear, but only a “within”: a digital total theatre! Link with further info

Article in Metro UK, the United Kingdoms newspaper with the highest daily circulation: “It’s clear the stage is the perfect place to test out such epochdefining tech. After all, theatre has always been the medium of play.” 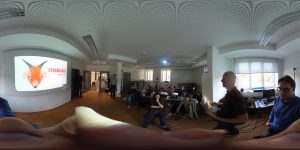 Our first work in Berlin: together with director Martin Grünheit we will work on “Die Biene im Kopf” (The bee in the head) for Theater an der Parkaue. The play premieres on April, 26th.

We showed ‘Memories of Borderline’ not only in the usual VR version, but as well in an interactive movie version (in 8k resolution and 3D) in their sensational Deep Space 8K theater. An inspiring festival and a very good experience for us. Thank you!

We are proud to be part of Ars Electronica Festival 2017. We’ll show ‘Memories of Borderline’ at Deep Space 8K, and the new VRLab.

The Memories of Borderline

Thank you Mannheim, thank you Weimar, thank you Berlin! More than 500 visitors saw our VR-theatre production “Der Geisterseher” after the play from Friedrich Schiller.

For ‘Digital Playground Festival’ in Bern, Switzerland, we had five days to prototype a new, immersive theatre piece. ‘Interferenzen’ is a about technological isolation, contact and the comfort in community. The guiding idea: how can we use VR not as a stage, but as one part of the play, making the basically one-person focus of VR into an interesting feature for a larger audience. Or short: to not only put theatre into VR, but to take VR into theatre, put it on stage.

Working on optimizing our pipeline to transfer 3d-pointclouds from laserscanning to realtime-VR. Take a virtual stroll through a pointcloud, Schumannstrasse in Berlin-Mitte:

First glimpse at VR models for Theatre Dortmunds award-winning “Borderline Prozession”. In May 2017 in Berlin:

Schauspiel Dortmund’s ‘Die Borderline Prozession’ is one of ‘the 10 ‘most remarkable theatre productions’ of this season and will travel to the Theatertreffen in our hometown Berlin this May. A well earned award, congratulations! It is somehow fitting that our Borderline VR experience will be ready at the same time…

Premiere of ‘Faust to go’ from Robert Lehniger is on January 21st in Düsseldorf. Break a leg!

Today, most stage designers already use 3d models to plan their stages, mostly to plot construction drawings. Few use Virtual Reality to ‘walk’ through their creations before they are even build.

To digitize existing stages for digital reproduction, you need to scan them, for example with a laserscanning device. The laser is able to survey sub-millimetre differences from 10 m distance, taking in details up to 200 m away. The survey data is subsequently turned into pointclouds, which are enhanced with photos to add surface and textures.

We used this method for our ongoing project for Schauspielhaus Dortmund’s “Die Borderline Prozession”. One compelling aspect of this wonderful play is the vast stageset. It is a static construction at the “Megastore”, containing 14 partial stages, outside spaces and a roof garden. The real minivan in front of a little shop is merely a prop…

This immense data set creates lots of artistical and technical opportunities: you can explore the stage in VR long after its deconstruction, you can isolate single elements, change, rescale or delete them, or add new ones, telling new stories in old or re-cycled stages.

We ourselves are fasciniated by all the options and opportunities the combination of laserscanning and virtual reality promise. Like Schauspiel Dortmund says: “We’re in the middle of an explosion…!”

We record actors holographically. Meaning: we scan their bodies surface geometrically, just with 3d scanning, only this time while they’re moving. Once recorded, we are able to use them like any other 3d model, watching them from all sides, manipulating them, etc. It is now possible, to really record a performance and to replay it in 2d or 3d.

You can choose the position, the cameras perspective in real time, change the viewing angle, rescale objects and actors, design camera flights, drive through bodies, try crazy stuff…
We use a system that enables the director to become the camera and do everything on her own, no coding required.

Working with this, the enthusiasm of participating artists and the curiosity of our visitors have produced a lot of new ideas and approaches. The technology is developing fast, we are looking forward to the new.

And the award goes to…

Marcel recieved the 3D Guild Award of the International 3D Summit in Liege, Belgium, in the category 3D VR Animated for his project ‘Pitoti Prometheus’ in December.